The Only Review of The Streak DVD That You'll Ever Need 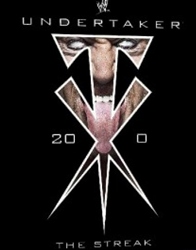 The Undertaker vs. Jimmy Snuka – WrestleMania 7 - March 24, 1991
It's funny how tame the sets look back then. I mean, this is WrestleMania, and the entrance is nothing more than a black curtain with the WWF logo on top. These days they must spend millions on the entrance sets alone. The match itself, well there's not much to speak of. Snuka's clearly off the cycles. They wrestle in slow motion for about 6 minutes then screw up a spot where Taker was suppose to catch Snuka and turn it into the Tombstone.
Undertaker hits Snuka with the Tombstone, getting the pin at 4:20 | *1/2

The Undertaker vs. Jake “The Snake” Roberts – WrestleMania 8 – April 5, 1992
They trade punches for a bit, and the match doesn't really pick up until Jake hits the first of two DDTs. When Taker sits up from the first one, from the crowd reaction, you can clearly hear that you've got a future World Champion. After the 2nd DDT, Jake could have scored the pin, but wanted the Urn instead. Where does one go to fence an item that controls a supernatural wrestling zombie? Anyway, while he struggles with Paul, The Undertaker comes from behind and delivers a Tombstone to the outside. Of course, you can see clear as day that Jake's head is about 6 feet from the ground. But much like a present, it's the thought that counts. A much better bout than the one against Snuka.
Taker hits the Tombstone outside, then rolls Jake in for the pin at 6:36 | **3/4

The Undertaker vs. Giant Gonzalez – WrestleMania 9 – April 4, 1993
This match was set up after Taker defeated Kamala in a set of matches and his manager, Harvey Wippleman, brought in Gonzalez to exact revenge. Pretty cool entrance on Undertaker's part. Bill Alfonso is the ref, before he got a set of teeth that were apparently carved out of rotted wood. I've never seen this match before, and right now I'm considering GG to be the worst wrestler to have wrestled for the Big 2. Oh boy, a really extended sleeper spot. This just keeps getting worse until GG gives Taker the chloroform rag about 6 hours into the match. He's stretchered to the back while the crowd chants for Hogan. Yeah, like Hogan is just gonna rush out to deal with a foreign bad guy when he uses an illegal substance on the good guy.
Gonzalez is DQ'ed for his use of a chloroform rag at 7:33 | DUD

The Undertaker vs. King Kong Bundy – WrestleMania 11 – April 2, 1995
For those who don't know, Al Bundy was named after KKB himself. And his neighbors Steve & Marci Rhodes were named after The American Dream. It wouldn't shock me if Dusty tried to get royalties. This match was set up after KKB interfered in Undertaker's match against IRS at the Rumble, and they stole the urn. For a while the focus is more about The Undertaker trying to get the urn back on the outside. He does at first, but while back in the ring, Kama runs down and takes it away. Afterward, Bundy and Taker put on a quality match that could sell out a gym in any state. At one point, Taker bodyslams Bundy, however I'm not sure if it was a body-slam, or a botched Tombstone attempt. Either way, a flying clothesline finishes it.
Bundy gets hit with a flying clothesline, then pinned at 6:36 | *3/4

The Undertaker vs. Diesel – WrestleMania 12 – March 31, 1996
Funny that the babyface Nash did shit as champion, but heel Nash made boat-loads of cash for the competition. The match is a lot better than I expected, with plenty of fists thrown in between power moves like sidewalk slams and big-boots. At one point The Undertaker receives two jack-knife powerbombs, but refuses to die. Soon after, it's the typical Undertaker formula, but leading up to that is a pretty decent match.
Undertaker delivers the Tombstone, earning the pin at 16:46 | ***

The Undertaker vs. Sycho Sid [C] – WrestleMania 13 – March 23, 1997 – WWE Championship
After Hall and Nash left, Sid became my main man. So, I was pretty bummed out when I saw this PPV, knowing that as cool as I thought Sid was, there was no way he could beat The Undertaker. Bret shows up to dress down Shawn, who's at commentary, then tells The Undertaker they aren't friends anymore. He then calls Sid a fraud, and Sid offers a powerbomb in response. I was too young to truly appreciate the fantastic work Bret was doing as a heel. As for the match, well, it starts off with a long bear-hug spot and doesn't pick up much after that. Honestly, the best word to describe this match is slow. Very slow.
Taker with the Tombstone & the pin at 21:19 | **

The Undertaker vs. Kane – WrestleMania 14 – March 28, 1998
One of the most anticipated matches in my history as a fan. I loved me some Stone Cold, but Undertaker vs Kane was why we got WM14. According to Cornette, Vince Russo wanted Undertaker to chokeslam Kane through a table 2 weeks after Badd Blood. Now, that would have blown the wad of the angle and completely made everything they were trying to do pointless, so I have a hard time believing it was Russo's idea. Unless the angle was suppose to end with Russo winning the title and having to forfeit it because his dick was too big to wrestle full-time.
I forgot just how strong they booked Kane in the beginning, I mean, he's not even selling straight right-hands from The Undertaker, and you may or may not know this, but he's the best pure striker in the game. It's a decent enough match, but despite having a million more together, they just don't have very good chemistry.
Undertaker delivers 3 Tombstones in order to put Kane down for the pin at 16:48 | **

The Undertaker vs. Big Boss Man – WrestleMania 15 – March 28, 1999 – Hell In A Cell
When people call this one of the worst matches of all time, it's not hyperbole, it really is. They bumble around and punch each other for the duration of the match until 'Taker has The Boss Man hung from the cage. JR says it's symbolic. Symbolic of what? A hanging?
Undertaker forces Boss Man to eat a Tombstone for the pin at 9:46 | DUD

The Undertaker vs. Triple H – WrestleMania 17 – April 1, 2001 – No DQ
They dub over Taker's Rollin' theme, but we're stuck listening to Lemmy guess the lyrics to a song he's apparently never heard. This is God-awful.”It's all about the Game, and how you game, it's all about The Game and if you can game, game...blargel cermudgen...the game you can't game is flip de floop claude toot ala smoore time to game the game”.
This match is without a doubt one of the hardest hitting I've ever seen. These guys go full tilt on each other to the point where I'd still stand behind my previous statement even if there were no weapons. But of course there are, with the highlight being Triple H pummeling The Undertaker with a chair so many times that it's bent to a crescent. One hell of a match, and my favorite from WM17.
Undertaker gives HHH the Last Ride into the pin at 18:57 | ****1/2


Showcase Showdown: If I ever watch the Undertaker wrestle at a WM again it'll be too soon. I don't know what it is, because superstar sets are suppose to feature multiple matches with the same person, but man did this set feel repetitive. It's probably because around WM 14 or so, everything was the same. The entrance, the look, the spots, and the finish. Despite that though, you can't argue the amount of quality matches on this set, as The Undertaker's streak started to become something more than a win or loss record. Every year you expected the match to be a MOTYC, and it was living up to those expectations for a while.
At the moment, it's unsure if The Undertaker will ever wrestle at WM again. If that's the case, I don't think there will be any regrets on his side or ours. The streak was the last title fans believed in, the last title that truly meant something and was a draw all its own. I honestly doubt we'll see something like this again, despite the fact WWE will constantly try. Because that's just it, something like this you can't create on purpose.
4 out of 5 Head-Butts.

A much deserved thank you to my editor, Mr. Steven Ferrari. The only guy more respected in the field of Thuganomics than a DR.

I've got more work at...
Str8 Gangster, No Chaser - recently updated with a new Saved By The Bell Archives article, Comic Book Films You Didn't Know Were Comic Book Films, and over 3 years worth of catalog.
WCW In 2000 - Recapping the entire year of 2000 in World Championship Wrestling
Man Movie Encyclopedia Vol.1 - My book about action films. Endorsed by Scott Keith & Maddox, as well as some fellow BOD'ers. Constant 5 star reviews on amazon.

Any questions, mailbag, or requests, let me know in the comments or hit me up at faucetofslfame@hotmail.com