Being The 'Marty Jannetty' Of A Tag Team

By Bob January 27, 2015
It’s the term that every tag team will experience at some point in time. It’s in reference to when the popular tag team known as the Rockers, which consisted of Shawn Michaels and Marty Jannetty, broke up and went into the singles ranks. Both men were very talented, but Michaels was the one who achieved higher acclaim while his former partner and friend drifted into obscurity.
Sure, it happened to Jannetty, but throughout history it has happened to seemingly every tag team that has ever been formed. The team will be successful, but when they breakup, only one man achieves anything in the singles ranks.
In this column, which will likely be broken up into several pieces because of so many tag teams, I’ll look at five tag teams shed light on who succeeded, and who dropped down the card.
m
They won the WWF World Tag Team Championships on two occasions and were both greatly popular and hated in the world of wrestling in the 80s for the NWA before heading to the WWF and becoming a popular tag team for the company. That tag team was known as the Road Warriors. 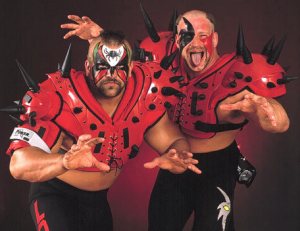 Even dating back to the 80s, it was apparent that officials regarded Road Warrior Hawk more than they regarded Road Warrior Animal. There are probably a few reasons. First, Hawk had a ton more charisma and energy. Whether it be talking, WHAT A RUSH, or his presence in the ring, Hawk kept people interested.
While, Animal was a muscle guy who didn’t provide much of anything for the fans, at least not me. When the tag team was in the WWF, they were kept as a tag team. Neither guy was given more time than the other.
That was completely different when they were wrestling for WCW in the 80s and early 90s. In the NWA/WCW, Hawk got several championship matches against champion Ric Flair, including a title match on pay per view called Bunkhouse Stampede in 1988.
After a two year run with the WWF, Hawk returned solo to WCW without Animal and was involved in a singles feud with WCW International Champion Rick Rude, though he didn’t win the title. He also had a singles run in WCW in 1995, mostly in the undercard before reuniting with Animal in 1996.
While Hawk didn’t win any singles championships, he was still quite popular on his own. On the other hand, any time Animal was working solo, the interest just was never there. Hawk was the guy who entertained fans and Animal was seemingly just there for the ride, from a fans perspective.

The next tag team is probably the most popular tag team of the 90s. Rick and Scott Steiner, simply known as the Steiner Brothers, put on classic tag team matches in WCW and WWF during their run that lasted nearly ten years when they split in 1998.
Prior to the split, though, both had runs as singles wrestlers. Dating back to 1991, both men had chances to breakthrough as singles stars. Scott Steiner wrestled Ric Flair on a Clash of the Champions, but failed to impress officials, which many blame Flair for screwing over Scotty. Rick Steiner had a run later on in the year with champion Lex Luger and nearly won the title on television.
It had always been evident that Scott Steiner was far more talented in the ring than Rick. Scott was the first to win singles gold when he won the WCW Television Championship in the fall of ’92 but the team left the company for the WWF where they returned to tag team prominence winning the tag titles there as well.
For six more years they teamed until Scott Steiner turned on his brother and joined the New World Order. By the end of 1998, Scott was the WCW Television Champion and would soon be in feuds with the likes of Diamond Dallas Page and Booker T. Rick Steiner would settle for feuding with guys like Fit Finlay.
They reunited by the spring of 1999, but Scott went out with injury and Rick would garner success with a WCW Television Championship run. However, Scott would be the only brother to win a major heavyweight championship when he won the WCW World Heavyweight Championship from Booker T in November 2000 and held the belt until March 2001.
Sure, Rick Steiner was a successful mid card title holder, but at one point he was seen as the bigger star of the Steiner Brothers, and he very well could have been, but Scott Steiner skyrocketed past his brother with better ability and with the perfection of his heel attitude.
Speaking of skyrocketing, that brings me to another WCW tag team known as Harlem Heat. Probably the most successful tag team for the company when it came to tag team title reigns. It’s one of the easier examples of knowing who was the stronger talent and who was there just to be body for a tag team.

Stevie Ray was a power oriented wrestler and had some charisma during his run, but Booker T was younger and just incredible in the ring. Booker was able to flashy moves and really pop the crowd. That became prevalent when Stevie Ray was out with an injury in late 1997. WCW wasted no time putting the WCW Television Championship on Booker T, who brought prestige back to a championship that had suffered with reigns by the likes of the Renegade in previous years.
Booker had classic matches with Chris Benoit and Fit Finlay throughout 1998 and worked with Bret Hart at the Bash at the Beach pay per view in July. His success almost made you forget about Stevie Ray, who would fall down the card, and fall down hard.
They’d briefly reunite in 1999 and win the tag titles again, but fans wanted to see Booker T and not Stevie Ray. In one of the rare times that WCW got something right, and the same thing can be said for Vince Russo, Booker T won the WCW World Heavyweight Championship at Bash at the Beach 2000 pinning Jeff Jarrett. Booker won the title five times in less than a year for a company that he should have been champion for years prior.
What did Stevie Ray do that was memorable? Well, he had a feud with Vincent and Horace Hogan over who would be the leader of the NWO Black & White when the group consisted of nothing but jobbers. By the time Booker won the top championship Ray was a commentator for WCW.
Sometimes a tag team will split up and the person the company wants to push a singles star just fails. That was the case with the popular tag team the New Age Outlaws. After winning the WWF World Tag Team Championships and being a huge part of the companies growth in 1998, the duo ventured off into singles roles in 1999. Road Dogg was able to win both the WWF Hardcore and Intercontinental Championships.

Billy Gunn won the WWF Hardcore Championship in 1999, but also was the 1999 King of the Ring winner. Billy was pushed up the card to work with The Rock at SummerSlam, but quickly came back down to the midcard. Throughout his career he would get more single pushes as he also won the WWF Intercontinental Championship in late 2000 for a month.
It may have been because Billy had a better look or better ability for why he got a push and Road Dogg fizzled out as a singles star. When I think about it, Road Dogg was far more charismatic and wasn’t far off talent wise from Billy.
What is funny is that Billy was highlighted as the star of the 90s tag team the Smoking Gunns with “brother” Bart Gunn. When they split up, Billy became the forgettable character Rockabilly, but he was clearly not setup to succeed with that garbage. The New Age Outlaws are an example of two guys better off being in a tag team.
The last tag team that I’m going to highlight this time around is a tag team that accomplished a lot for Total Non-Stop Action. America’s Most Wanted consisted of Chris Harris and James Storm. Their tag team lasted from 2002 to early 2007.

In 2004, James Storm was hurt and Chris Harris was given a chance to shine in a singles role. I remember at the time reading that TNA saw Chris Harris as their future with very little mention of James Storm. When they would tag, fans reacted to Harris while Storm didn’t get much of a reaction it seemed.
But in 2004, Harris shined as he wrestled NWA World Champion Jeff Jarrett a couple of times but came up short in singles match. Even though he lost, he was still seen as a credible wrestler who could become a main event guy for the company.
Fast forward three years and the two of them feud with James Storm turning on Harris. They have a great Texas Death Match at Sacrifice in May of 2007, which Harris won. With the victory, many though that Harris was destined to rise up the card, but by the fall Harris was in the midcard and wasn’t elevated. Soon enough, Harris was out of the company and his career was effectively killed off when he had a short, but somehow memorable, run as Braden Walker for the WWE’s version of ECW.
James Storm, on the other hand, became one of the most entertaining heels in the company and while he formed an entertaining tag team with Bobby Roode known as Beer Money Inc., he would be the one who became the singles star.
After a split with Bobby Roode, James Storm became a highly popular baby face and managed to become the TNA World Champion, even if it was for only eight days. When Storm won the championship in October of 2011, he was the top baby face for the company and had really found his groove in wrestling as a singles wrestler.
Today, Storm continues to entertain on TNA programming while Chris Harris hasn’t been heard from in years.
Similar to a once popular wrestling star, Marty Jannetty.
What are some more tag teams that had one partner outshine the other that was memorable? Leave your thoughts below!
Thanks for reading.

For more columns and wrestling reviews, head over to WRESTLING RECAPS. Over 3,000 reviews from all the major companies!