From the Grudge Match: Ted Blanchard Reviews Clash of the Champions XXXI 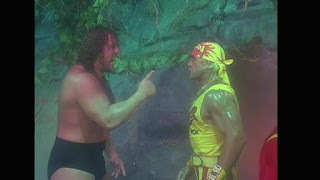 We begin right away (well, for the Clash portion. WCW Main Event also took place live, the review of which will be in my forthcoming book) with Michael Buffer introducing the first match...

Meng/Kurasawa vs. Hawk/Sting- Sting won the vacant U.S. title at the Great American Bash from Meng. We begin with all four men in the ring. Hawk throws Kurasawa outside, and Hawk and Sting dump Meng. Col. Parker confers with his charges, then Kurasawa and Hawk go at it. Hawk takes him down by the legs, and headbutts him low. Sting atomic drops Kura, and rams his head to the buckle. Chops from Kura, but he misses a corner charge. Sting suplexes him for two, and he and Hawk double-elbow him. Kura clotheslines Hawk down, and Meng clotheslines him but Hawk doesn't sell. Meng chops Hawk then clotheslines him again, but Hawk won't go down. Kura jumps in on Hawk's arm, and the two fall outside. Kura back suplexes Hawk on the mat. Sting comes and pounds on Kura, who eventually pushes Hawk back in. Kura eats boot on a charge, and gets clotheslined. Meng breaks up a Hawk submission, and then legally comes in. Hawk gets a swinging neckbreaker, then slams Kura. Hawk hits a splash from the top, then powerbombs (!) Kura. Meng breaks that up, but Sting hits a flying clothesline on Meng. Sting backdrops Meng, and hits a DDT. Hawk clotheslines Meng, then Sting hits the Stinger Splash, and his bulldog thing. Sting and Hawk double clothesline Kura, then hit a Doomsday Device for three. Huh. Meng pulls out Sting, then Kura gets a kimura and "breaks" Hawk's arm. I actually thought that was how the match ended. Kurasawa and especially Hawk didn't seem to be playing nice in the match. I think they faced off again at Halloween Havoc, then Kura was gone. **

We take a look at happenings from the Main Event, which I'm not going to tell you about so that you'll buy my Clash book. Ha!

We take a "live" look at the physical Dungeon of Doom, where Hulk Hogan will venture to later. In a day without Garmin or Google Maps, I have no idea how he found its coordinates.

Parker tells "Mean" Gene Okerlund that was the Kurasawa Crunch. He said his boys have bad blood (hey!) with the Harlem Heat. The Heat will team with Sherri vs. Parker and the Stud Stable.

Diamond Dallas Page vs. Alex Wright- DDP shoves Wright down, but Wright rolls him up for two. Wright then gets another quick two. Dropkick knocks DDP outside, and Wright splashes him. DDP in storyline had just won $13 million. He neckbreakers Wright on the top, then works his arm back in. Wright reverses and Fireman's Carry's him. DDP whips him ot the corner, but Wright flips over him and dropkicks DDP. Wright headbutts DDP in the gut through the ropes, then splashes him for two. More arm work from Wright. Page leapfrogs Wright but gets crossbody'd for two. Page then slugs him down, and kicks him in the ribs. DDP hits an inverted backbreaker, and Kimberly holds up a "10." I wonder if Scotty Riggs did that after winning at strip poker with Kimberly. Swinging neckbreaker, but he doesn't cover Wright. Page chokes Wright on the top rope. Wright backslides DDP for two, and Page misses a corner charge and hits steel. They slug it out, and Wright hits an elbow and a spinwheel kick. Flying knee from Wright gets two. Wright hits a missile dropkick for 2.9. Wright pounds on DDP in the corner, but Page snake-eyes him for two. Wright German suplexes him for a nearfall, then hits a flying forearm to knock Page outside. Wright tries a splash but Page takes a step to his right to avoid it. DDP then pins him inside. *** This was maybe the beginning of "Holy shit, DDP can wrestle now!"

Gene talks to Ric Flair and Arn Anderson. Arn says he's going to wear Vader down and then tag Flair.

World TV championship, Paul Orndorff vs. The Renegade (c)- This is a rematch from Bash at the Beach. Orndorff ambushes Renegade coming in the ring, but gets clotheslined. Powerslam by Gade, and the fake Warrior still has the belt on. Orndorff suplexes him off of the buckles while he's celebrating for two. Boogie-Woogie Elbow on Renegade's throat, and Orndorff rakes his face. Paula works over Renegade, and rams his head to the top buckle. Clothesline, and I just noticed how atrophied Orndorff's right arm had gotten. He throws Gade outside, and  rams him off of the apron like it's a THQ wresting game. Orndorff snaps his neck on the top rope, and still won't let him back in the ring. While Paul argues with Nick Patrick, Gade splashes in for the win. *1/2. Sadly, even though I quickly realized Renegade wasn't Jim Helwig when he debuted, I still liked him while he was getting pushed. I guess it's like how I just enjoyed a Who tribute band at Summerfest last weekend. Sometimes it's nice to at least see a facsimile of the real thing (though said band Substitute plays the songs really well, while Renegade was a sloppy imposter).

Gene talks to Vader. I was too busy writing my Renegade-Who soliloquy to hear it. Sorry.
Back to Gene after the break. He hypes the WCW Hotline, Fall Brawl and a contest for Hulk's Harley. We also take a look at the history of the Stud Stable and Harlem Heat. Note- though the Stable have the tag title belts here, I think they may be in the midst of one of those negative title reigns, where they used a non-title match for the title change on TV, and that the Heat had already won them back at a taping at this point.

Stud Stable/Col. Parker vs. Harlem Heat/Sister Sherri- The Heat have to hold Sherri back to begin. Stevie Ray rams Dick Slater's head to the top turnbuckles. Stevie bodyslams him, and rakes his eyes. Bunkhouse Buck in, and Booker pounds on him. Buck boots him but Booker dropkicks him off the top buckle. SHerri slaps Buck for good measure, and Booker slams him. Booker misses an elbow but Spinarooni's and elbows Buck. Stevie in, and Slater back-elbows him. Slater does his drunken sell and Stevie kicks him. Sherri punches Slater next. Stevie then chokes Slater in the corner. AND THEN- they go to a break, air a commercial about how to win Hogan's Harley, and casually announce that the winner will be announced on the premiere of something call WCW Monday Nitro. Tony Schiavone then explains that WCW is going prime time on Labor Day. He hilariously says an Emmy award-winning sportscaster will join the announce team on Nitro. They had to have had someone else in mind- Mongo can't be any sort of Emmy winner. Buck dropkicks Booker and puts him in a bearhug. Booker tags Stevie, but Colonel was distracting the ref. Parker then tags in and pounds on Booker, but he punches Parker in the midsection. The Heat suplex Parker, then tag Sherri. She gives him a bodypress off the top for two, drops an elbow on him, and then legdrops his giblets. Sherri goes up but misses a frog splash. She seems to have been knocked out. Parker picks her up, and she Thesz presses him and starts smooching him. She also gets the pin. *3/4. Sherri then chases Parker and rolls around on the floor with him, obviously very concussed.

Gene with Hulk and Jimmy Hart. Hulk's not going to tear his shirt off yet; he'll wait until he enters the Dungeon of Doom. So...he's in the building now. Where exactly is the Dungeon of Doom? Is it near the Wyatt Compound, which is most likely in Florida? He is also apparently going to ride his bike wearing bikini briefs, which he helpfully whips out. I...just can't even.

After a break, Gene (who has gotten the most screentime by far on this show) is with Tomas Diaz, the MDA National Goodwill Ambassador. Tomas won't answer Gene's softballs. Macho Man then comes out, and Tomas will actually talk to him. Macho Man then tells Tomas about Monday Nitro. Macho gently pats him and has his arm around him. I remember hearing what a great ambassador Macho was, probably like how Cena is today. We then get a brief Macho Man music video. Macho had already appeared on the Main Event show, doing something really important.

So then Hogan and his barber stripe pants enters the Dungeon while Sullivan and the Emperor converse. Then El Hijo Del Andre comes in and chokes out Hogan as the other Doomers put the boots to him. Then, Vader comes in and pounds away on everybody. Giant lets go of his choke, and Sting, Macho and Jimmy Hart escort Hogan out. This is all too stupid to take seriously.

Tony and Bobby chat about Nitro.

Ric Flair/Arn Anderson vs. Vader- Tony says one can only ask why Vader rushed into the DoD. I'm not sure we ever really got that answer, as Vader was gone from WCW by the first Nitro. Arn gets some shots in, then Vader boxes his ears and stomps him. Vader gets an atomic drop, and clotheslines Arn over the top. Vader punches and headbutts Arn back in, and hits a short-arm clothesline. Arn then gets the spinebuster with Vader coming off the ropes. Now he tags Flair, who rakes Vader's eyes with his boot. Vader press slams Flair twice. Flair flips, and Vader clotheslines him off the apron. Meanwhile, Arn clips Vader's knee. Flair kicks his knee and tags Arn. Arn gets a DDT, but tags Flair. Ric applies the Figure Four. Vader slams Flair off of the top, and backdrops Natch. Arn breaks up a pin. Vader hits a top-rope splash,  but Arn again makes the save. Vader clotheslines Flair, and powerbombs Arn for the win. **1/4.  Flair yells at Arn about the loss. Flair then goes to leave, and Arn pulls him in by his hair. There seems to be trouble brewing...

Gene interviews Hogan, Savage and Sting at the entrance. They declare war! Vader than walks out and tells him no one tells Vader what time it is.

This was kind of hit and miss. DDP and Wright was surprisingly good, though. The misses would soon kind of go away (to a point) with the debut of Nitro, and all of the changes that entailed.