From the Grudge Match: Ted Blanchard Reviews Clash of the Champions XXXII 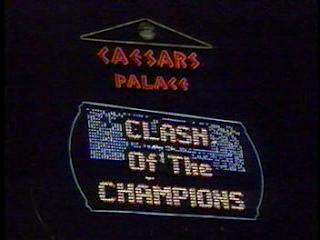 Live from Las Vegas. Hosted by Tony and the Brain.

Last night on Nitro- Randy Savage won the WCW World title from Ric Flair, then argued with Ric Flair. Now, you might think a world title change would be better to put on a TV special like this one. I have no counter argument, but their thinking was probably "Monday Night War." Lex Luger and Sting also won the tag team title from Harlem Heat on that Nitro, and conveniently were already scheduled to face the Blue Bloods.

Also, Hogan and Savage have a surprise in their corner, which was announced on Nitro- Miss Elizabeth.

"Mean" Gene Okerlund is at the Little White Chapel, where Col. Parker and Sherri will be getting hitched. If you recall, Sherri suffered a head injury at the last Clash, and now loves Parker.

Public Enemy vs. The Nasty Boys- PE debuted a week ago, putting Marcus Bagwell through a table. Knobbs clotheslines Grunge inside, while Sags rams Rocco Rock into the railing. Knobbs charges Grunge but hits buckles, and gets back suplexed. Rocco goes up on the railing but gets crotched. Grunge dances inside but misses a charge and ends up outside. Sags comes back with a table. Knobbs jumps out but hits the railing. Sags puts the table in the corner but Rock bulldogs out of it. Rocco moonsaults onto Knobbs. Knobbs backelbows Rock, and Sags piledrives Grunge. Knobbs sets up the table but Rock ends up moonsaulting onto Knobbs, and the table of course doesn't break. The bell rang right before that. Sags threw the table at Grunge on the floor, then kept beating him with part of the table in the aisle. *1/4.

Eric Bischoff brings out Ric Flair and The Giant. Jimmy Hart was now managing both. Flair won the title from Savage at Starrcade. Flair says a little girl told him last night that with him, she's gonna fantasize, but with the Giant, she's going to giantsize. Ok then.
Dean Malenko vs.  Alex Wright- They chain wrestle to begin. Wright grabs a headlock and they do standing switches and handsprings and Wright gets a dropkick and a headscissors takeover. Attention- there's a live chat with Bischoff going on right now on Compuserve! Dean wraps Wright's knee on the post. Malenko does a leg whip and grabs a leglock. Wright gets a bodypress off the top. Wright dropkicks Malenko, but gets back suplexed. Wright dropkicks him while he's on the top, and superplexes him. Wright German suplexes him for two. Malenko grabs the ropes to avoid another. Wright flips off of him in the corner, but Dean rolls him up for what looks like a two-count. That's the finish, so I think someone fucked up. **

Kevin Sullivan vs. Disco Inferno- Disco isn't actually there. He sent an Elvis impersonator in his place, who sings a song about Disco being at the wedding. Sullivan then beats up the guy, and Jimmy Hart says "The Taskmaster hates Elvis impersonators, baby." That was stupid.

Gene is at the chapel, and talks to Bunkhouse Buck and Dick Slater.

Bischoff brings out Sting and Luger. The the Road Warriors make their return, and want to challenge for the title. Sting's game, but Luger points out that the State Patrol and others are before them in line.

We see a promo from Paul Orndorff, who is wearing a neck brace. He was aattacked by Brian

Pillman and the Horsemen, and suffered a career-ending injury. He said his right arm is weakening and he needs surgery. This must be how they wrote him out, as he injured that arm in '86, but didn't want to take the time off to fix it because he was working with Hogan. My other takeaway from this is what an awful dresser Pillman was during this era. Kind of takes the edge off of the character.

Back to Gene, as Parker arrives and needs $50 for the cab.

Brian Pillman vs. Eddie Guerrero- Here he is wearing a T-shirt with James Dean on it, with the area around his nipple cut out. Eddie looks so young here. The 10 years between this and his death did such a number on him, obviously. Pillman is outside arguiing with fans. Guerrero gets a shoulderblock, and dropkicsk Pillman outside. Pillman grabs Heenan to block Eddie's potential dive off the top, and the WWE Network leaves in Heenan saying "what the fuck are you doing?" That was a shoot, and Bobby even walks around the ring and down the aisle. I think he later said he was worried about his neck. Pillman offers a handshake back in, which Eddie takes and then kicks Pillman. He gets a tilt-a-whirl backbreaerker, but Pillman bites his nose and chops him down. Pillman chokes him on the mat, as he can't work his "Flyin'" style any more. Side headlock, and Eddie dropkicks him. Another dropkick sends him out. Pillman runs into Eddie's knees, and then he hits a tornado DDT for two. Pillman grabs Eddies legs and covers with his feet on the ropes for two. Pillman hits a crossbody and pulls the tights for two. Pillman tries to slide out onto the announce table, and Heenan again gets up. **

Bischoff brings out Hogan, Savage and future Packers outside linebackers coach Kevin Greene. Hogan gets a dig in at Savage, saying we already know that Liz is more than Savage can handle. Bet he appreciated that one.

World tag team championship, The Blue Bloods vs. Lex Luger/Sting (c)-  We start with lots of Regal wacky faces. He gets Sting in a wristlock, which gets reversed. Sting shoulders him down, and grabs a headlock. Dropkick, Luger takes a cheapshot and Sting claps his head. Eaton in, and Luger gets thrown to the floor by Bobby. He charged Luger but gets backdropped and clotheslined on the cement. Luger then picks him up and throws him back in. Regal comes in all upset, and he cheapshots Luger in the corner. He knees Luger in the forehead, and tags Eagon. Swinging neckbreaker drops the Total Package. Regal drops an elbow for two. Eaton hits a knee off of the top, and Regal does the Regal stretch. Sting breaks it up, then Eaton jumps off the top and Luger catches him and slams him. Luger and Eaton bonk heads and collapse. Sting gets tagged and is a house afire. Sting gets forearmed by Eaton, and because of that hits the ropes which crotches Eaton. Sting then gets the win with the Scorpion. **3/4.

Gene talks to Harlem Heat, who want neck bones. Lovely. Parker is actually cracking me up, with his doublespeak and coverups to Sherri.

Bischoff talks to Pillman, who know has tie dyed pants. Cool. Guy. He threatens to hack off our thumbs to make the Horsemen sign. Ooooh, edgy.

Mexican championship, Psichosis vs. Konnan (c)- I'm not sure what the title really is, unless WCW made it up. Konnan armdrags him to start, and the race to the floor. Konnan goes up and hits an armdrag. Psi hits the top rope with his legs but doesn't do a move. Konnan locks Psi in a submission style move. Konnan hits a German suplex, then another. Konnan slingshots him and grabs an armbar. Psi grabs a submission hold. Psi chops Konnan, but he gets another armdrag. Konnan gets a flying headscissor, and two armdrags. Konnan dropkicks his knee and hits a spike DDT. Konnan backdrops him to the apron, but gets missile dropkicked. Tope to the outside and both men are down. Konnan places him on the top buckle, and German suplexed him off of the top. Konnan wraps his arms and leg up and Psi submits. ***

Gene talks to Parker. Sherri is changing in the back of the limo. Gene offers to walk her down the aisle, and the wedding is on!

After break Gene walks her across the parking lot. Disco dances and the Heat looks pissed. Slater has tears in his eyes, aww. They are at the driveup window on foot. When the lady asks if anyone objects Madusa comes out of Parker's RV, and attacks Sherri. She's probably still mad about losing at Superclash II. Disco walks off with champagne bottles. I'm not going to hate on this; it's stupid wrestling comedy.

Giant/Ric Flair vs. Hulk Hogan/Randy Savage- I'm not even going to try to figure out what nickname to call Hogan and Savage here. Woman and Linda Hogan are part of their entourage, and then a busty Miss Elizabeth comes up. Yowza. Flair taunts Greene and says if they get into it, Greene will miss the Super Bowl Sunday and they'll blame the Nature Boy. Another time, Big Man. I don't think Flair and Greene ever wrestled each other, but they did team up. Savage backdrops Flair and clotheslines him. Flair Flips in the corner, and Hogan big boots him as he comes down the apron. Hogan then throws him back in, and Savage chops him. Savage punches away at Flair, and holds him for Hogan. Giant in, and Hogan too. Giant shoves him to the corner twice. Hogan grabs a headlock, but gets shouldered down. Hogan rakes his eyes but can't slam him. Giant then gets his own slam, and kicks Hogan in the gut. Hogan keeps laying back down. Giant headbutts him low, and slams him. Giant misses an elbowdrop, and Hogan rakes his eyes and slams him. Flair gets a War and Peace suplex and poses, but Hogan no-sells and pops up. Hogan backdrops him and clotheslines him, and rakes Giant's eyes. Hogan keeps going after Giant, and they end up outside. He rolls Hogan in, and he no-sells Flair's chops. Back elbow and Flair goes up, but Hogan slams him off. Hogan tags Macho, who goes up and hits an axehandle. Bodyslam and Savage goes for the elbow as Hogan clotheslines Giant out. He hits it, but gets distracted by Hart. Flair hits him with brass knucks for the win. *3/4. Was kind of short, and the Hogan vs. Giant sequence was pretty bad. Zodiak and Pillman run in and get double noggin-knocked. Greene comes and he and Hogan throw the heels out, then tend to Savage. Good lord, Elizabeth.

Not WCW's best effort, though they were throwing everything into Nitro at this point. Like I said, I won't hate on the wedding stuff. It was inoffensive and even blew off an angle (I think; I don't remember Sherri and Parker being together after this, but who knows). Things will be much different in WCW by the next Clash, believe you me.