From the Grudge Match: Ted Blanchard Reviews Clash of the Champions XXXIII 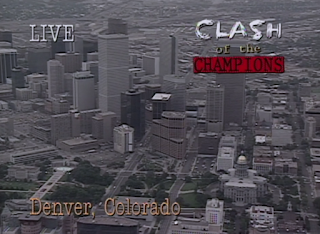 Live from the Coliseum, where that Raw should have been held in 2009 but Vince McMahon's a big baby and canceled six shows out of spite. #Kroenkewasright

Since the last Clash, wrestling changed forever. Seriously. Scott Hall walked out during the Memorial Day Nitro, and Kevin Nash soon followed him from the WWF. The pair attacked Eric Bischoff at the Great American Bash, and then at Bash at the Beach Sting, Lex Luger and Randy Savage faced Hall and Nash, and later...Hulk Hogan. Fans were shocked that Hogan finally turned heel, and pelted him with garbage. At Hog Wild Hogan regained the WCW World title from the man who he (sort of) lost it to at Halloween Havoc, the Giant.

Tony and Bobby Heenan show footage from Nitro where Sting and Luger were facing the Outsiders, and the Horsemen rushed the ring because Nick Patrick was letting anything go. That's what the announcers said, anyway.

We see Hogan and the Outsiders beating up the Booty Man at Road Wild, then see Hogan beating up Ric Flair from Nitro. Then we get clips of promos from Flair and Hogan on their match right here, tonight.

WCW cruiserweight championship, Dean Malenko vs. Rey Mysterio Jr. (c)- This is the first Clash for Rey-Rey, who the current tusk calling himself Rey Mysterio could probably eat. Dean whips Rey, who goes under the bottom rope out and right back in. Rey rams Dean's head to the buckles, then slides under and hits him with a headscissors outside. Rey armdrags Dean and hits a spring flip for two, then a spinning wheel kick sends him out. Rey does the correct version of the 619, which doesn't connect and thus can't kill someone. Drop toehold back in, but Dean puts Rey in a powerbomb position then stun guns Rey. Dean brainbusters Rey for two. Rey and flips to Dean's shoulders and attempts a sunset flip, and rolls him up for two. Dean grabs a headlock as the three men in the ring obviously are working something out. They head to a break and Dean ally-oops Rey, who bounces off the top rope and after a sequence Rey bridges into a pin for two. Dean gets a kneebar and then tosses Rey up on a backdrop for two. More conferring with Randy Anderson. Dean tries a go-behind but ends up outside. Rey dropkicks him, then hits a somersault into a senton splash outside (thanks Mike Tenay). Rey moonsaults off of the guardrail on Dean, and springboard dropkicks him for two. Rey hits a frankensteiner off the top rope for two. Dean backdrops Rey to the apron, and Dean does his awesome firemen's carry off the top that ends with a gutbuster. Anderson counts a pin but realizes Rey had his foot on the rope. Rey then gets a victory roll and pin to retain. ***

VK Wallstreet vs. Hacksaw Duggan- Duggan gets a hiptoss and clothesline. Wallstreet reached under the ring and got an international object. He stunned Duggan on the top rope while getting back in. Wallstreet hit a charging Duggan with a back elbow, and Hacksaw got out of a sleepr with a jambreaker. Duggan scoop slams him, then wraps his fist with tape. The idiot gets caught up in the tape, and Wallstreet wraps him up in it. *

"Mean" Gene with the Nasty Boys. All they're going to do is fight.

Ultimo Dragon vs. Konnan- K-Dawg is acting heelish, but isn't a gangsta rapper yet. Konnan tied him in an Indian deathlock, and shouldered him down. Dragon goes out to confer with Sonny Ono. Konnan backdrops Dragon, who no-sells and dropkicks Konnan out. Onoo kicks K-Dawg, who  goes after Onoo but Dragon flies out onto him. Back in, an Asai moonsault and a cradle for two. Suplex and they fight over reverslas, and Konnan pulls the tights for the win. ** Match was just getting going.

We see Ice Train chatting on Compuserve with a broken arm, and Scott Norton attacking him/it.

Randy Savage vs. Meng- Meng wins by forfeit because of Savage's injuries on Nitro, when Hogan chairshot-d him in the back of the head. Gene then interviews Kevin Sullivan, Meng and Jimmy Hart. Sullivan said people always knew when he was coming with a chairshot, and he hasn't been praising Hogan the last year and half like Gene did. We also see their leprechaun running around the ring. Sullivan says they, not the Horsemen, are WCW's last stand.

Bull Nakano vs. Madusa- first women's match after all of this time, and possible the only one. Madusa kicks to start, but misses a dropkick. Bull hair drags her twice. Bobby says she's a charming woman. Today she is, and is a pro golfer! Bull hits her with nunchuks as Ono distracts the ref. Bull clotheslines her down. Madusa goes off the top then, does her own hair drags. This is dumb-downed from the '94 series. Bull drops on her on a sunset flip attempt. Bull on the top gets dropkicked, and Madusa jumps off the top but hits Ono by mistake. Ono kicks Bull by mistake, and Dusa gets the pin. * That was also on the Clash DVD set, but probably just for something/someone different to be featured.

Gene talks to Flair and his women. All I got out of it was references to the Avalanche and the Rockies.

BattleBowl championship, Diamond Dallas Page vs. Eddie Guerrero - The championship is a ring. Page shoves him down to start, but Guerrero gets a shoulderblock and headscissors. Eddie dropkicks him in one corner, but misses a charge in another. Page stomps away and chokes Eddie with his book. Gutwrench powerbomb (called gutbuster by Schiavone), then a side salto for two, or side slam. DDP gets an extended headlock, as I'm sure they're comiserating. He puts his feet on the ropes a couple of times at least. Eddie armdrags him but sweeps his leg. They slug away, and Eddie dropkicks him. Somersault from the apron to page gets two, but DDP jawbreaks him. Powerbomb gets 2.5. DDP puts him on the top but Eddie headbutts him, then hits the frogsplash for the ring. **3/4. DDP was getting better and better. DDP hits a diamond cutter and then tosses the ref. He hits another, and I always saw that and worrid the ring would get kicked out. Chavo runs out, then DDP gives Eddie a cutter from the middle rope.

Hogan drags Gene out for an interview. Hogan was taken aback by some of Gene's derogatory comments. Flair, in all of his glory, couldn't lace Hogan's boots up. He said Flair will be known as the Stupid Little Man who Couldn't Get the Job Done. He's about as creative as Donald Trump with nicknames. I'm still surprised he wasn't on Donald's ticket. They're both orange, and Hogan once promised to dogpaddle Donald to safety at Wrestlemania IV.

You guys, Glacier is coming!!!!

Chris Benoit vs. The Giant- Benoit gets stuck in his jacket and while Elizabeth and Woman try to get him out of it, Giant dropkicks him. He then chokeslams Benoit for the quick pin. Nothing worth rating here, though I'm always fine with not having to watch Chris Benoit matches.

WCW world tag team championship, Harlem Heat (c) vs. Sting/Lex Luger vs. The Steiners- I think this is the first triple-threat match on a Clash, so it's another first right before the series ends. I never noticed how much "Steinerized" and "Man Called Sting" sound similar before now.  Col. Parker walked out separately and stood with Sherri, so I guess their angle didn't end at the last Clash. Tony thanks their production crew for producing nine live hours of content. 2016 WWE's production crew says ha; welcome to our world. Booker pounds on Scott to start, and gets punched in the corner. Booker sidekicks him. Scott tries to suplex Booker off, gets pushed down but then crotches Booker. Luger gets a cheapshot clothesline on the apron and puts Booker on the floor. Scott tags Luger, which Tony rightly calls a mistake. Stevie Ray pounds Luger down in the corner, but Luger responds in kind. Lariat drops Stevie, who ducks another from Luger but gets one from Rick Steiner, who gives Luger one as well. Steiner bulldogs Ray for a two-count that Luger breaks up. After Steiner and Lex argue, Stevie hits a Harlem sidekick on Rick. Booker gets tagged as they go to break. Rick catches Booker in the air for a powerslam, but Sting tagged in and comes off the top on Booker for two. Sting hiptosses him to the floor, but Nick Patrick says it's momentum. Sting throws him in, leapfrogs him and military presses Booker. Stevie Ray breaks it up. Sting tags Luger, who hits an axehandle on Booker. Vertical suplex but Stevie pulls Luger off. Stevie attacks Sting after both get tagged. Scott tags in on Stevie, and Steiner works Sting's arm. Top hammerlock takes Sting down, but he bridges out. Steiner gets a shoulderblock but Sting Stun Guns him. Sting hits a clothesline off the top for two, broken up by Rick. Steiner hits a scorpion death drop on Sting, then his double-arm powerbomb. Luger breaks it up, and he and Rick get into it. Rick comes in, and Luger tags himself in. Rick whips Luger in but gets lariat'd. Luger clotheslines him in the corner, but misses a charge and gets German suplexed. Scott belly-to-belly's Luger, who then catches Scott coming off the middle and turns it into a torture rack! Rick comes in and kicks Luger, and it's a pier-six brawl. Booker hits a Harlem sidekick on Scott inside, as the Outsiders have arrived. Frankensteiner inside, but Nick Patrick counts to two and then calls a DQ because of the nWo's interference. Scott Steiner grabs him by the shirt but mercifully doesn't murder him on the spot. ***3/4. This was a spirited affair.

Okerlund talks to Patrick, who says the Outsiders attacked guys on the floor. Gene said they never got in the ring. Patrick says what makes a referee great is the ability to see two different things at the same time. Gene mentions the nice Armani suits Patrick has been wearing lately. That's cold, Gene. I side with Patrick on this one; that was outside interference.

WCW World championship, Ric Flair vs. Hulk Hogan (c)- Flair grabs a headlock to begin.  Hogan gets a shoulderblock and taunts him. Hogan threatens Woman and Liz. Flair goes back to the headlock, and Hogan places him on the top but Flair slaps him. This is not as fast-moving as the tag title match was, by far. Hogan gets a hammerlock and trips him down, then misses a clothesline and gets chopped. Flair punches Hogan down and he bails out. Hogan threatens to punch some woman at ringside, and Flair leaps off the apron on him. Flair bites his fingers and chops him, but when Hogan bounces out of the corner they just sort of collide. Not sure what happened there. Hogan whips him and he Flair Flips to the floor. Hogan rams him to the railing, and ringpost. More punches back in, another Flair Flip but he punches Hogan this time. War and Peace suplex by Flair, but Hogan Hulks Up. Big boot, but Hulky misses the legdrop. Figure four on Hogan, which Hulk tries to turn over but Flair turns it back. Hogan threw Randy Anderson while still in the hold, and then the Outsiders ran in. The Horsemen, Sting and Luger then ran them off.  Hulk disqualified, *1/2. Man, I gotta watch the '96 War Games match tonight. You should, too...

I don't know if they had too many matches scheduled (if the whole card was even announced on Nitro beforehand), but the Savage forfeit and Giant-Benoit probably didn't have to both happen to move those storylines forward. There was so much going on here, and our friend Sting is about to make some major changes.