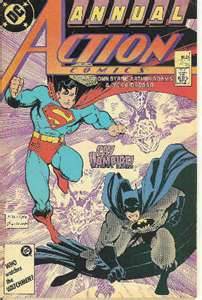 Ah Halloween. This holiday has been my favorite holiday for as long as I can remember. I haven’t dressed in a costume since I was twelve and yet this holiday remains very special to me. Still fresh in my mind is being four years old and dressing as Darth Vader but never getting a lightsaber because all they had at the store were the green ones. Being the picky little shit I was I made my mom travel to all three places in the little town I grew up in looking for one and still only found green lightsabers. Personally I liked the green one better, but Darth Vader did not have a green lightsaber so I had no lightsaber with the story that it was in the shop for repairs when anyone asked. It was the same when I played with action figures as well. For instance the Juggernaut action figure was the same size as the rest of the X-Men figures so I could not buy him because he wasn’t to scale. Boy I was a messed up little kid. Getting back to Halloween I still find something really fun about Halloween every year, even though the extent of my celebration is eating candy and watching scary movies.  Every year that I have had a job I have asked for the day off, and when my employers would ask what I was doing I was always a little flummoxed as to what to say. Eventually I started saying I had to have the day off for my Unholy holiday… that shut them right up with a strange “get this guy out of my office!” look.  So in celebration for this weirdest of holidays I am reviewing that time that Superman and Batman fought a town of vampires. I swear that this cheesy sounding crossover is actually pretty good and was also the first issue to pop into my head when I was pondering what to do in this installment of IHI.

As we open the comic we see a mob trampling through the swamp with torches and pitchforks. 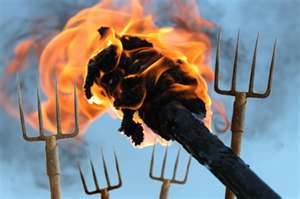 They are yelling for a young lady named Skeeter to stop where she is. The nut loving blonde is barefoot and scared out of her mind as she flees for her life. (She’s also wishing Art Adams had drawn her more for speed then hotness at this point.) 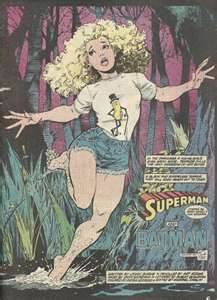 This Review brought to you by Planter's

Skeeter knows the swamp better than anyone but even she can’t hide forever as she hopes someone from the outside will come in and rescue her. The Daisy duke wearing blonde gets so turned around that she ends up at her own house.  Skeeter does not want to lead the mob to her Paw and Mammy so off again she goes diving into the bog. The townsfolk reach the water’s edge and figure she has swam to the other side which would take hours to reach and Dawn is approaching soon so they will have to wait to capture Skeeter’s sweet, sweet behind. The girl gets out of the water and walks weakly to the shack, crumpling to the floor of two figures sitting at a table. Skeeter then says she should never have left the swamp and went to the big city for an "edjucashun" because the town would not have done what they did to her parents if she had been there. Then we see the decaying dead faces of her parents propped up in their chairs.

The next page we get one of those old school comic ad pages where we can learn martial arts, gain muscles and see girl’s bones through their clothes I guess. (Though these ads sure do explain some of the early UFC competitors from back in the day don’t they?) 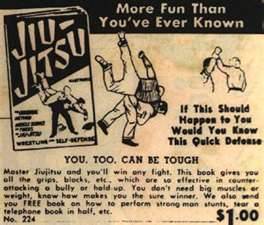 One week with this and you can make Anderson Silva your bitch! Kidding, kidding Mr. Silva if you’re reading this. 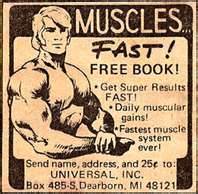 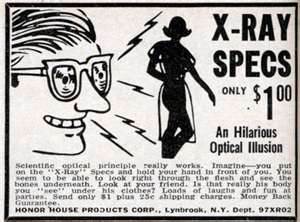 Next we get Bruce Wayne giving a woman a ride into the nearest town. The woman was broken down on the highway and Wayne was nice enough to give her a lift into town. Bruce Wayne is in disguise as he is wearing glasses and a fake mustache. He’s also built like a brick shithouse and he’s using the last name Smith so he’s obviously on his game here. 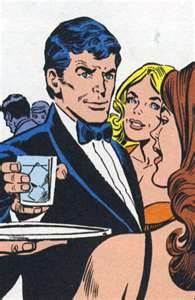 Bruce heads into the only diner in town to score some information but just as he is starting to get somewhere with the waitress, she is admonished by a Bernardo from Westside story lookalike named Clovis.  (Bruce looks at this guy like, “I am going to enjoy knocking you the fuck out later in this issue.”)

That night Wayne has checked into a room and notes that no one in town is all that friendly, he then pulls out the costume ready to stalk the night and get some answers.

From the rooftops Batman finds that everyone seems to shuffle around and in pairs. Something is definitely up in this town. He then hears a woman scream and swoops down to the alley to find Ms. Carson, the woman he gave a ride into town, dead. Noting that her throat has been ripped out just like other victims in Gotham, he is found by the mob. The mob surrounds Bats who does not want to fight the townsfolk but does not see any other way out. Dropping a smoke grenade he kicks one guy and stiff arms a couple of others as he breaks through the crowd. Batman scrambles up a telephone pole and puts a call in to the Daily Planet to speak with Clark Kent. (This was shortly after the post crisis reboot and Batman and Superman had only met once before. They know each other’s identities at this point, but they still didn’t trust each other.)

Kent obliges the call for help and off he is to meet Batman. Batman is just leaving the phone line when Skeeter approaches him exclaiming “you came!!” Batman notes to himself that he does not know how this girl could sneak up on him. Skeeter goes off on a rant about him finally being here to help her and that he was too late for her parents but not for her. Bruce thinks to himself, “She’s not the slightest bit afraid of me.”

Superman reaches the town and notices how quiet it is, but with a quick x-ray glance he notices that no one is sleeping. Even people that are in their beds are wide awake and scared. Seeing no sign of Batman and always doing everything by the book, Supes decides to approach the local law enforcement for information. The Sheriff and his deputy are of course surprised to see the hero here in their little town just as Superman is surprised to see a sharpened stake in the desk of the local law enforcement. Big Blue asks if they have had a any contact with Batman, and of course they haven’t because Batman is still just a vigilante in everyone’s minds at this point in time. The deputy asks the Sheriff if they should even trust Superman because he could be one of them. The Sheriff exclaims that he knows Superman when he sees him and this is Superman, not a vampire, to which Superman gives a look like, “a whatpire?”

At this same time Skeeter is leading Batman through the swamps to her house.  As they reach the inside of the shack, Batman finds the dead corpses of Skeeters parents that look like they have been dead many years, he says, “Good Lord!!” Skeeter is shocked that he would say the name of the lord. Batman then replies that he does not know who she thinks he is, but she is mistaken. 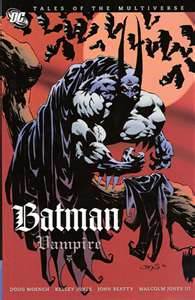 Superman is being led to the local hospital where the deputy is telling him that they do not have the Vampire situation under control and they have no clue how to handle it. Opening up a wing in the hospital that has been boarded up, Superman is shocked to see rows of dead people that may or may not be getting up soon.

Skeeter is confronting Batman about his identity and Batman starts to notice his head is getting fuzzy. 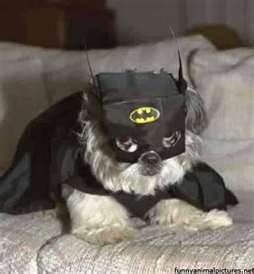 Not what I meant… very cute though 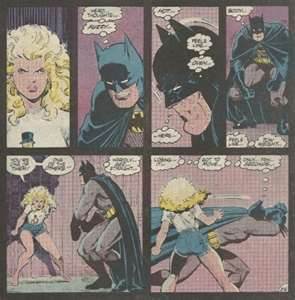 Skeeter claims that he is one of "them" and Bruce bolts out of the shack as fast as his boots can carry him. Busting through the wall he lands in quicksand outside and sinks as Skeeter looks on. 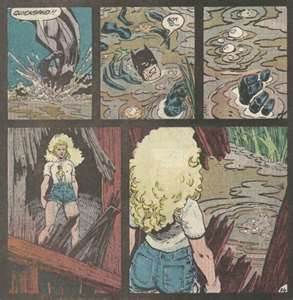 The young blonde with a dark secret starts to think that maybe she is all alone and that maybe she needs to take care of things all by herself. Skeeter heads to the local jail and busts out all her comrades and sets them to attack the town. Superman flies into action but knows that all of them are just slaves to the main Vampire and not dead yet. So instead of being able to burn them all into nothing with heat vision he will have to play nice. Moving at superspeed he gathers them all together and builds a very impressive brick wall around them.  Superman is then confronted by Skeeter who reveals her real name as being Elly Mae Skaggs (Yeah that’s striking fear in everyone’s hearts.) Skeeter then tries her mind control bit on Supes but all it does is give him a "two beer" buzz. Angry, the blonde vampire leaps forward and scratches into the Man of Steel’s chest. At first Superman is thrown, but then realizes Vampires are supernatural creatures which mean magic and that means it’s one of his weaknesses. (For the record his other weaknesses are Kryptonite, red suns, and women whose first and last names both start with L.) Knowing shit just got real, Superman punches Skeeter who goes full vampire and gets Clark in a standing closed guard and tries the hypnotizing trick again, this time right in his face.  Just as she is about to make Superman her bitch, Skeeter gets a large wooden pole shoved into her from behind… ahem.

On the next page we find Batman who has just save Superman’s life and slayed his first supernatural creature. Superman says he owes Batman his life. Batman replies, “It was self-preservation because I do not want a flying super vampire to contend with.” 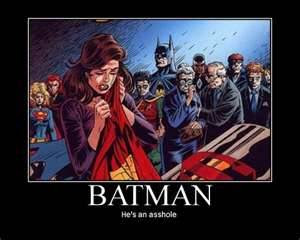 Batman also tells Clark that he needs to douse the scratches in holy water, just in case. The next page it’s the morning after and a large amount of holes have been dug in the cemetery where they are now going to bury all of the dead. Commissioner Gordon has even showed up and just can’t believe that a little girl killed this many people. Batman corrects the commissioner that he checked the records in town hall and little Skeeter was born two days after Lincoln was assassinated and her and parents became vampires over a hundred years ago. 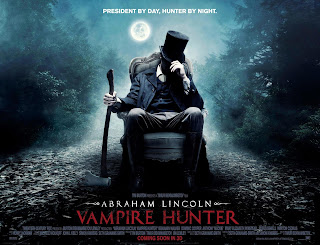 Coincidence? Yeah actually it is.

Gordon comments that at least it’s over now. Batman responds, not quite. One last thing to do before night falls… You and your men are free to leave… if you don’t feel like watching…” In his left hand are a bunch of stakes and in his right hand a wooden mallet. (Awesome)

This comic has more plot holes then Lost but it’s still a fun read. Worth picking up cheap if you see it!