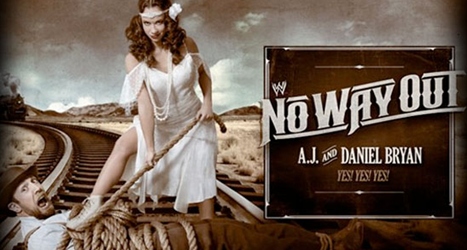 This is brought to you via a request from Jobber123. Any other requests, movie or wrestling, or pretty much whatever you'd like to see reviewed, just let me know in the comments, or email at faucetofslfame@hotmail.com . I'm also up for answering questions, mailbag style if you guys would like.

Before we get started, I thought I'd list my Top 5 favorite matches, so you guys have a reference point for how I see & rate matches.

I have absolutely no idea what's on this card, besides the triple threat, so I'm actually looking forward to it. 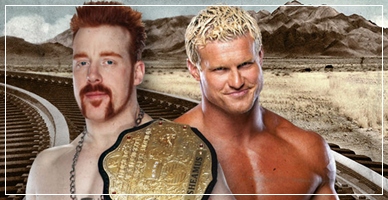 Sheamus [C] vs Dolph Ziggler - World Heavyweight Championship
I had my fingers crossed that it wasn't Del Rio, so now I can look forward to this bout. Geez, Sheamus really is a smiling goof, isn't he? A few minutes in, and the match is really working. It reminds me of Freddy vs Jason, in that Sheamus is Jason, a big monster who chooses his attacks, and when you're hit, you're down. Then obviously Dolph is Freddy, who's extremely quick and agile, hitting you 10 times before you have a chance to block the first attempt. It's great how in the beginning, Dolph could barely get a 1 count, now as the match moves along, he's getting longer 2 counts the more he lays into Sheamus. I'd also like to give some credit to Vickie, she really is a great heel manager. This really is great so far. I haven't seen a match where a guy truly makes himself in it in years. I'm buying Ziggler as a legit threat because of this match alone now. The crowd agrees as they chant like CRAZY for him! Now what's gonna happen? Alberto will get the feud, then Big Show gets the strap, and THAT'S why the E is where it's at now. This is a great match, and further proof that Ziggler is the future. However, he may end up being the future for another company.
Ziggler eats the Brouge Kick, giving Sheamus the pin at 15:10 | **** 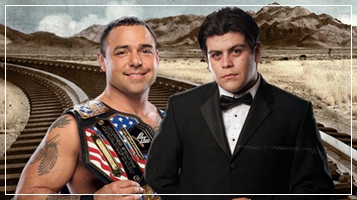 Santino Marella vs Ricardo Rodriguez - Tuxedo Match
You know, Ricardo is actually a talent. He knows how to play the Bobby Heenan style heel better than I've seen anyone since, well, Bobby. I know Santino annoys others, but I think he's damn funny. Ater Ricardo rips his pocket, Santino looks at him with disbelief and says "This is my ONLY tuxedo!" The crowd is chanting "boring", and at first I thought they were chanting Goldberg. Which makes sense I'd think that. You think formal where, you think  Goldberg.
Santino kicks Ricardo in the face, rips off the rest of his tux at 4:25 | *

We interview CM Punk, and it's the usual. By the way, he digs crazy chicks. I'm shocked they never had a Bunny Boiler Match with her. 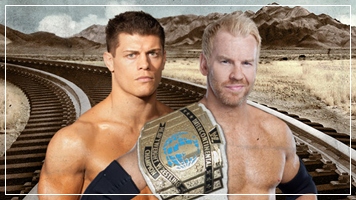 Cody Rhodes vs Christian [C] - Intercontinental Championship
They do a great little chain of spots at the beginning that's unlike most of the RVD-esq chain wrestling you'd see. Honestly it's sort of like martial-arts choreography, with kicks, jumps, blocks & reversals. Cool stuff. For a bit, there's nothing wrong with the match, but nothing memorable. However they really picked it up near the end, putting a sweet spot on an already fine wrestling match. Great stuff. Followed up the WHC match perfectly.
Christian hits Cody with the spear, snagging the pin at 11:30 | ***1/2

We get the unskippable 'Don't Try This At Home' msg. I wonder if they had this when I was a kid if it would have kept me from leaping off the sofa onto pillows while I watched Action Zone and my parent's were at church. Severely doubt it. 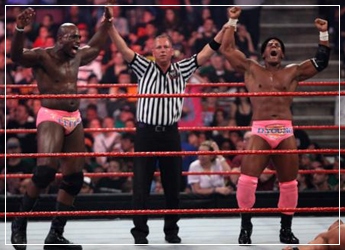 Epico & Primo vs Justin Gabriel & Tyson Kidd vs Primetime Players vs The Usos - Winners are #1 Contenders
Oh man, I'm really bummed now. I seriously only know about 3 of these guys, and since I already don't favor tag-wrestling  I'm starting to feel angry towards Jobber123. We're told that the tag-champs are out due to injury by The Big Show. Well,  I'm really salivating now. I mean, if one of these nobodies get a shot, they'll be on to face a team that couldn't handle themselves against one man! Tyson Kidd gets his chance, and he's actually pretty exciting. Rosa Mendes is a bit of alright. Darren Young has a vicious finisher, wow. I have no problem admitting that this match completely won me over. Good stuff.
Darren Young hits Primo with his finisher for the win at 9:30 | **3/4

We get a recap of Brock Lesnar vs Triple H. Wow, what a feud. Will Lesnar face him in a cage? In a hardcore match? HIAC? NO! This will be done in a court room! With celebrity enforcer, the baddest man on the planet, Andy Griffith.

Triple H comes out to amp up the excitement. He takes about 3 hours to explain he wants to fight Lesnar at SummerSlam. He really should have been wearing a duster and telling us 'queerin don't work' if he was going to conduct an interview like that. 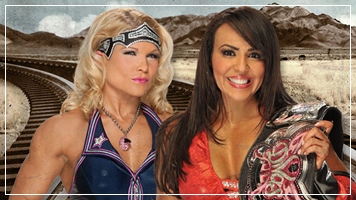 Beth Phoenix vs Layla [C] - Divas Championship
Typical match. Nothing terrible though. Perfectly acceptable. High point being when she goes for the pin she totally grabs some of Beth's boobage. Right on. I don't have the ethics of Scott, that boobage earns a quarter star.
Layla hits Beth with a reverse stunner for the pin at 6:30 | *1/4

AJ's been going around, kissing people and wishing them good luck. Well, it ends with her making out with Kane, which I just find odd for some reason. Does she not see his previous track record with woman? Does she want to end up a violated corpse? Or raped & forced to wed? Could be worse, New Jack could be telling stories about her. And uh, I don't watch Smackdown or Raw, but I clearly see the fuss about AJ. She's more than a bit of alright. 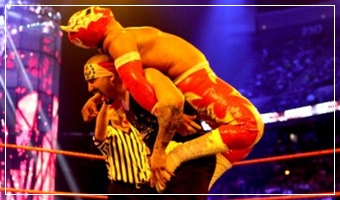 Hunico vs Sin Cara
I don't get it. Is there some sort of bill that was passed that said all Spanish wrestlers must be as stereotypical as a George Lopez stand-up routine? Alberto is the only one who's escaped it. They say Sin Cara was at one point Mexico's biggest box-office draw. Normally I'd doubt this claim, but I've seen the $5 bin of Spanish DVDs at Wal-Mart, and if I had a choice between Peligro Es Mi Segundo Nombre - Quatro, and Sin Cara, well....Honestly, not a bad match. Good enough filler.
Sin Cara hits a Hurracarana on Hunico for the pin at 5:48 | **

Kane vs Daniel Bryan vs CM Punk [C] - WWE Championship
I seriously don't see the problem with running Punk vs Bryan for a year straight. Cool moment that reminds me of Joe vs AJ vs Daniels where Bryan & Punk take turns kicking Kane, as Bryan screams "Yes!" and Punk screams "No!". I've still got 10 minutes left, and this may be the best triple threat I've ever seen. It's so fluid, there's never an extended period where a guy lays out side, and the other two brawl. Wow. I didn't type much, because I was completely involved in this match. One of the most exciting title matches I've ever seen. When it was announced that Kane was involved, I remember being really mad, thinking he'd drag them down. But I'm more than happy to admit I was wrong. His power based offense mixed seamlessly with Punk & Bryan's technical wrestling. Absolutely fantastic.
Punk hits the GTS on Kane for the pin at 18:18 | ****3/4 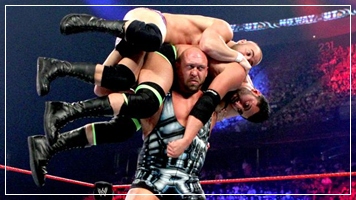 Ryback vs Delaney & Grimes
Well, I think after last night's Survivor Series match, the Ryback Main Event Trial is over. How many fantastic matches has Punk had this year? What two were at the bottom? The ones with Ryback. But this isn't about that. It's what you'd expect.
Ryback rocks a double Muscle Buster for the pin at 1:31 | * 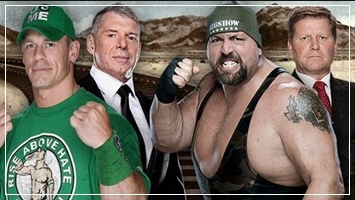 John Cena vs Big Show - Steel Cage
So far, this match is exceeding the dread I had going into it. It's not nearly as boring as I thought it might be. Great spot where Big Show drops an elbow from the top rope. Thankfully he doesn't hit Cena, because there's no way he could have kicked out of it, and not even I could suspend my disbelief if he had. Laurinaitis' suit is insane. He looks the Kool-Aid Man, if he'd given up the drink game to become a pimp or something. Big Show knocks out the ref by accident, then Cena, and as he heads to the door, Brodus Clay shows up with a chair to prevent exit. Some nice continuity. For those who don't remember, Show had knocked out Brodus weeks earlier, giving him a concussion. All in all, a lot of people may dislike this bout, but I thought it was a pretty decent power match that I think really established Show's dominance. I mean, Cena only won because of other people. Flat out. Nice little spot at the end where the hero Cena puts a defenseless man though a table after he was fired. I do like that he adjusted his tie after knocking him out though. That Cena, he'll adjust your attitude & tie.
Cena wins by escaping the cage at 19:33 | **3/4 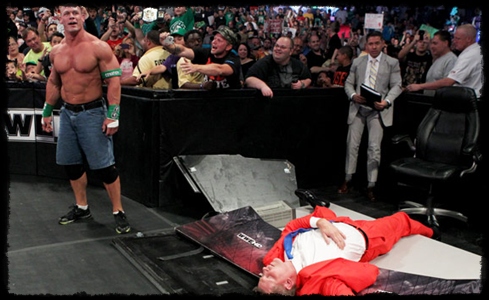 Showcase Showdown: Big recko for this show. Almost every match was great, and those that weren't were thankfully short. Definitely belongs alongside Extreme Rules & WrestleMania as the best the WWE has to offer this year. One hell of a show that I plan on adding to my DVD collection, and that's the highest recko I can give something.

Hope you guys dug the review. If you're wanting some more of the Cal-Cal Man, here's some links:
Str8 Gangster, No Chaser - Movie reviews, Man Movie Encyclopedia, Top 5's, wrestling articles.
WCW In 2000 - A full recap of every Nitro & PPV from the year 2000.
Man Movie Encyclopedia - 28 films, baby. Each recapped, then you're given the count of every 1-liner, person beat up, killed, boobies, swear words, and other bad-assery. You also get unknown facts, and box-office trivia. At $2.99, you can't beat it. Maddox & Scott Keith themselves have both endorsed it. So if you liked the Twilight books, you'll love the MME!