Like a stern high school teacher looking over your shoulder during a test and coughing in your ear when your answer to the essay question is only two sentences long, 1001 Spikes guilts you into bettering yourself. You cannot come lightly to it, else perish on a forgotten trap or die jumping directly into an arrow you really should have known was coming.

Taking a retro 2D platforming art style, offering same-screen multiplayer, and hundreds of levels, 1001 Spikes will conjur up ghosts of the first Spelunky, but outside of the visual style and genre and requiring keys to progress to the next level, the games aren't that much alike. Yes, there are traps and spikes and enemies, but Spelunky encouraged speedy and skillful play and 1001 Spikes demands focus and patience. It's the difference between The Fast & The Furious, and Drive - both movies features cars and violence, but they could not be more different. Additionally 1001 Spikes is a bit more streamlined. You have a jump button, and attack button, and that's it - whereas Spelunky involved item shops and all sorts of goodies and nicknacks to aid you on your journey.

Though by the end of 1001 Spikes fifth level you may be rooting around the level for some cyanide to end your suffering. When people say Golf is a bad way to ruin a good walk, they're essentially saying the intense challenge and frustration of golf results in a stressful, but ideally rewarding experience. 1001 Spikes is the same way. 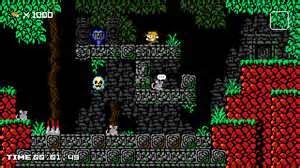 Namely because 1001 Spikes does a wonderful job of setting the rules. You know what a given level is going to entail, you just need to be prepared and maintain focus long enough to succeed - It's like taking that aforementioned test, if you're prepared, it's not nearly as scary as it seems. There are few 'gotchyha!' moments, and despite using 200 of the 1001 lives you're given at the start of the game, I never felt cheated or unfairly punished. Instead I turned the rage inward, blaming myself because I either took a shortcut I shouldn't have, or miss-timed a jump I made a dozen times before out of frustration with my own skill.

1001 Spikes is from Nicalis, the creators of the excellent Cave Story, and they share similarities in their zen like nature. They require peace of mind. With distractions, slamming doors, people talking in your ear, or worries about what tomorrow will bring, 1001 Spikes will eat your lunch all day long. But in a meditative state of concentration, the progress you make is as rewarding as it is enthralling - it's acing a test you actually studied for. It's getting a birdie on a par 4. It's asking the cute girl from the movie theater out on a date while maintaining eye contact and not stumbling over your words.

You find yourself surprised by what you're capable of.

Which is to say that in its best moments, 1001 Spikes helps transcend your own perceived limitations. There will be frustration and seemingly impossible challenges, and you will fail way more often than you succeed. But because the failure is your own fault, victory is your own doing too - and all the more sweet because of it. To paraphrase Taylor Mali, 1001 Spikes makes you work harder than you ever could, coughing in your ear that you better not dare waste its time with anything less than your very best.