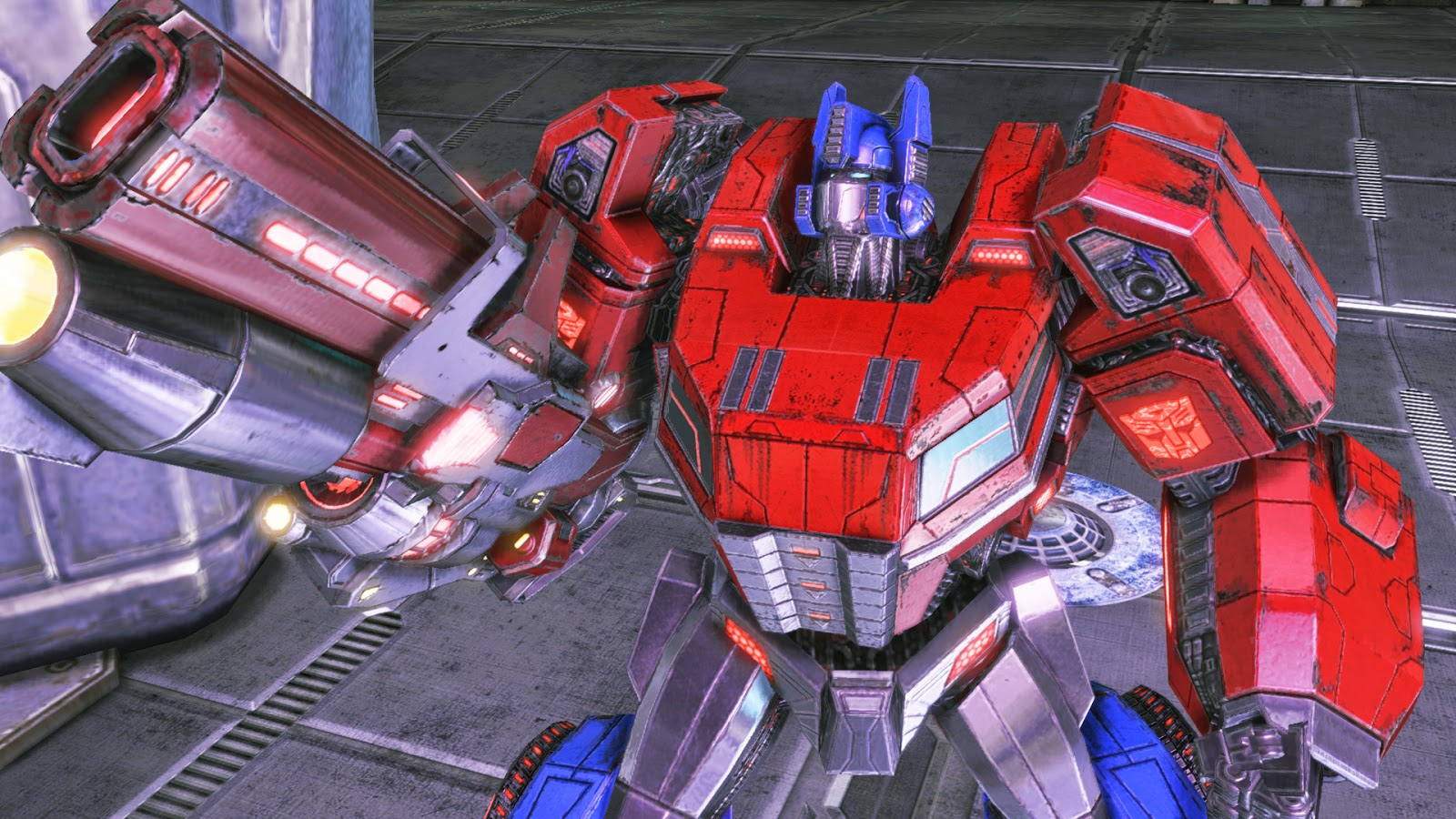 "Is it violent?" Said mom, aware that the majority of modern day Xbox One content was pretty gross.
"Nah, it's a new Transformers game, 'Rise of The Dark Spark'"

"Yup - but since there's a video game about them I don't need my imagination to have fun with them like I did as a kid!" I made a motion like I was cradling my precious Optimus Primal and Dinosaur Megatron toys in my hands and smashing them together Psshshhh Boososshhh Chishhhhh.
You never remember the day you stop playing with your favorite toys. Everyone put away their Hot Rod, Starscream, Soundwave, and that giant Godzilla toy with the removable tail for the last time at some point, but the specifics are always murky. But the (un)fortunate reality of the situation is Transformers: Rise of The Dark Spark does it better than your imagination ever could.

Situated as a tie-in game with Transformers: Age of Extinction, Rise of The Dark Spark is actually another game in the War For Cybertron series developed by High Noon Studios, even though it was technically developed by Edge of Reality- the guys who did the ports of the Tony Hawk games for the n64. Regardless, the game feels right at home right away.

This is a high-octane third person shooter without cover mechanics or regenerating health, with a strong focus on weapon upgrades, tech modifications, special abilities, blowing enemies into circuit boards, or melting them via corrosive poison like a 50 foot tall Wicked Witch of The West. It's a blast.

Initial impressions are positive, and the first robot you control is Drift, a samurai robot voiced in the movie by Ken Watanabe. The game gets the tutorial stuff out of the way early, and by the 20 minute mark you can transform, boost jump, melee, and you're also introduced to the endless number of meta objectives.

For example, while Drift is given a photon cannon, he says he'd prefer to use his sword. If you beat the level without firing a shot, you're rewarded with a 'gear box' which holds all kinds of upgrades, like weapons, character skins, and more. The fan service in this game is insane.

The action is equally as insane and pretty tricky, and you'll die a lot as success requires a fair amount of strategy. You'll need to strafe, flank, conserve high-payload ammo for when you need it, and generally avoid running directly into the oncoming fire of multiple enemies. You may find yourself wanting to play Transformers: Rise Of The Dark Spark as a brainless action game, but it's...I'm sorry...more than meets the eye in that regard.

Speaking of your eyes, and what's pleasing to them, on the Xbox One everything has a shiny gloss, and the metal reflections go a long way to making your favorite characters look better than ever. There's very little texture pop-in, and while the graphics won't blow you away, there are plenty of great explosions and neat touches that will get your pulse pounding, and watching certain characters transform is almost as cool as it was when you were a kid. If you were a kid with a bevy of Transformers toys, Rise of The Dark Spark also serves as one final trip to the toy store. You'll see the Insecticons and remember which of them you had and which of them you wanted. You'll see Starscream in all his blue and red and gray glory and immediately remember how jealous you were of your friend Dave across the street who owned two of him. You'll play as Soundwave and instantly flash back to that time your Dad stepped on poor Razorbeak and cut his foot.

You may also remember the stories you told while smashing these robots together on your bed which doubled as a battlefield, or kitchen table whose edge was a perfectly fine place-holder for an active volcano.

When it comes to the story in this game, well...meh. The last two games in the series - War for Cybertron and Fall of Cybertron, told a pretty creative origin story about how Optimus Prime and the Autobots fled Cybertron for earth, and the last one ended on a cliff-hanger that would hopefully result in the next game in the series re-telling a good chunk of the Generation 1 mythos in its own special way. 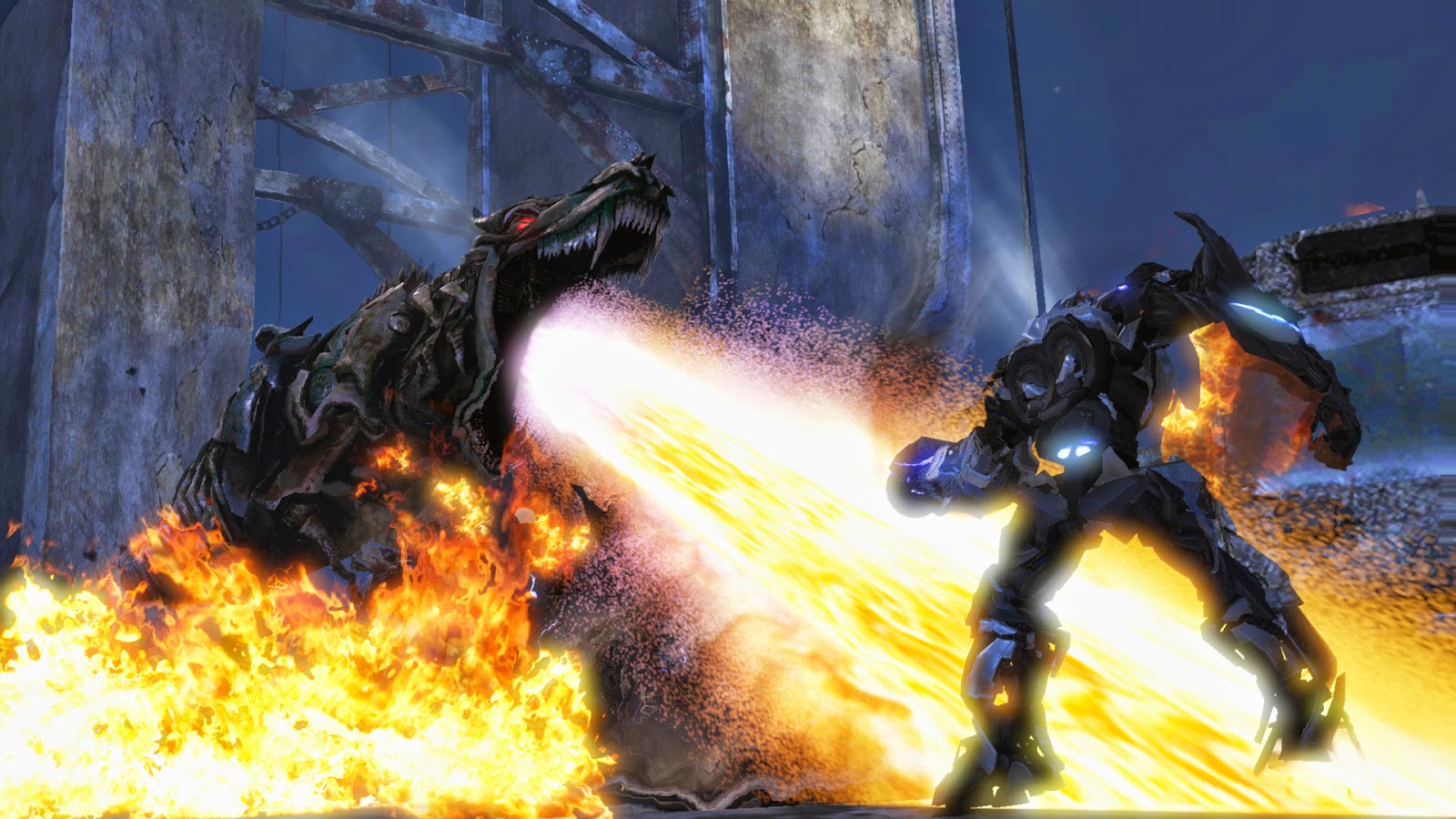 So it's unfortunate that this game is actually kind of a mid-quel, taking place between those two games, while also slamming in the Autobots and Decepticons from Michael Bay's Transformers games and very direct references to the *actual* 80s cartoon. This is all thanks to a macguffin known as the "Dark Spark" which allows the person who controls it to jump between dimensions and alter the very fabric of reality.

Which remains odd, even though Transformers has always been a pretty theological property. Depending on your favorite 'generation' you're dealing with ancient guardians, various matrices of leadership, sparks of power and / or darkness, Energon, something to do with being enlightened as a 'Prime' and lonely monkeys in the desert which is surely a metaphor for something.

It's all pretty strange and hard to really dive into, and once you toss in alternate dimensions and more than one version of some of our favorite heroes and villains, the whole thing becomes a mess. An entertaining and really fun mess, sure, but eventually you just go with the flow and enjoy the cool moments without actively trying to make sense of anything.

It's sort of like how X-men is supposedly a metaphor for inequality and homosexuality and racism, but all the popular stories seem to involve aliens and space travel. Transformers doesn't need all this extra stuff to tell an entertaining yarn about giant robots punching each-other.

Anyway, if the worst thing you can say about a game released as a tie-in to a movie where the plot isn't important, it that the story kind of sucks, you can't really complain. This game is quality. It's exciting, it's challenging, there's a ton of supplemental content, including multiple multiplayer modes with a bunch of customization, a horde mode, and more.

Most importantly, it's old-school in that if your 12 year old brain pictured the perfect Transformers game, it'd look quite a lot like this, and you'd never pick up your toys again.