By zanatude July 28, 2014
From the organization that's gaining television contracts, not losing them!

After the Jerry Lawler intro we get yet another tweak on the opening montage, with some fairly recent action mixed in including Ricky Morton in tag action and the Triple Jump Elbow of Doom.  Putting on their best face for the execs at Heritage TV!

Week 2 of freedom for Joe Wheeler, so Beau James is here to run his mouth off at 170 miles an hour in front of SSW Sign That's Too Big For This Shot Event Center.

Beau harkens back to the SSW Mission Statement that I referenced on my debut write-up: Bastardize The Past, Lie About The Present, and Rape The Future.  Or something like that.  To that end, Beau is happy to announce that this week's show is the first to air in Northern Virginia on Heritage TV.  Oh wait, that's NORTON, Virginia.  Well, close enough.  He also gives a shout out to the remainder of his television empire, as well as the unlikely viewer in New Zealand watching the show on YouTube.

Sorry, Crikey.  Maybe if you pound the refresh key a few times you'll get the shout out next time.

But back to business.  Last week, DeAndre Jackson was robbed of the Southern States Wrestling Heavyweight Championship by an inept referee, likely on the receiving end of another bad check by the reigning champion Kyle Kool.  How much money on the plastic surgery, brother!?

Beau uses this as a platform to spend the next five minutes reviewing the Jackson/Kool feud that has ranged on for month.  Go ahead and check it out for yourself.  I don't do re-rants.

Bottom line, Equalizer Krunch wants revenge for his bad check, DeAndre Jackson is getting a rematch just as soon as they can find a bingo hall that a ring can fit inside, and Ray Idol is gunning for that SSW title as well.  How much longer can Kyle Kool hold on?

But speaking of champions, there's a NEW champion in Southern States Wrestling, and Beau's gonna tell us about it soon.  Plus, Misty James gets a shot at regaining the SSW Ladies Title against current champion Rebecca Lynn.  For realz this time!

Same commercials as last week.  I've half a mind to ask Beau how much he wants for 30 seconds of air time, and create a Blog of Doom commercial for his show.

There were only three minutes of commercials being shown, so let's have Beau spend another minute talking about them.

Rebecca Lynn is the ladies champion, but she won that title by nefarious means.  Let's see them yet again, and then let's go to highlights of the rematch at the Gray Block Party!

Beau tells us that the match is being joined in progress.  Apparently Misty James hit a shitty armdrag before this footage began, so she hits another shitty armdrag so that guy in New Zealand can appreciate it as well.  Misty James is all about fan service!

Misty grabs the hair and slams Rebecca Lynn into the turnbuckle before throwing her into the middle of the ring with a shitty hiptoss.  Sorry, but I just can't find an appropriate synonym for "shitty" that adequately describes Misty's offense.

After a quick two count Misty hits a shi...er, a a lazy-ass vertical suplex that requires Rebecca Lynn to do all of the work for another 2.0001 count.  Grrrr....

Will the nerd in the overalls please sit down!??

Rebecca takes over with about 30 seconds of SSW Ladies Offense before Misty reverses.  I will say that Misty gives a much better chop than Rebecca...but she throws away any good will by hitting a....a...damn it, it was a SHITTY biel!  There is no other word of any kind to accurately convey the nuances of a Misty James throw!

Rebecca James takes over somehow; there's no psychology, it was just time for her to do so.  Cinching in on the Two Minute Mark Resthold, I imagine Rebecca and Misty are racking their brains trying to come up with a screwjob finish that they haven't done before.

Misty takes over and hits the worst Macho Man clothesline I have ever seen, but it was still strong enough to keep Rebecca down for a whopping 2.2 count.

They do an entertaining strong style punch off that begs for a dueling BOO!/YEAH! chant that never happens, but that's too good for television, so let's skip ahead to a rest hold.

Actually, Beau, let us just skip ahead to the finish.  Rebecca throws Misty into the ropes and attempts a clothesline, but they're both so loopy that they just clang heads and collapse instead.  That's good enough to keep both competitors down for a ten count, presenting us with yet another novel screw job to keep this eternal feud continuing.

Double countout in unknown time due to An Insult To Our Collective Intelligence.  Rebecca Lynn retains her title.

Wasn't enough of the match shown to rate, but I'm sure it was something between -* and -***.  It might be raised another half star if I'm allowed to count the spirited post-match brawl though.  If they'd forget trying to do wrestling holds that they both suck at and just go balls-to-the-walls fighting like that for two or three minutes, you'd hear no complaints from me.

Back to Beau, who tells us about another recent show where Rebecca successfully defended her title against Misty, and also namedrops Miss Rachel and her sidekick Whasshername.  Didn't expect to hear Miss Rachael's name on television again...maybe he's trying to patch things up with LT Falk?  Beau had better hurry up before he's locked in to NXT.

Next week, we go around the country with Misty James, seeing the sights, facing the top competitors, and killing time that was supposed to be filled by the TV tapings last week!

Oh, there's a new TV champion, and his name is Jake Booth!  Of course, you can't see the television title change hands on television, so you'll just have to check out the fancam footage of that epic two star match.

After the commercials, we get:

No, they're not shoving this red-headed stepchild down your throats, why do you ask?

I'm not sure why this match was happening on the same show where the six-man tag was supposed to take place, but it's a sad state of affairs when your talent pool is so depleted that you're forced to use Jake Fucking Booth twice to fill out a show.

I guess Krunch is a tweener now, or he just goes where the money is?  It might be an interesting role if it weren't being filled by a sexagenarian.

As you can tell, I'm doing everything that I possibly can to get out of talking about the match.  You really want to know about it?  Well, a picture is worth a thousand words, so here's my quota filled: 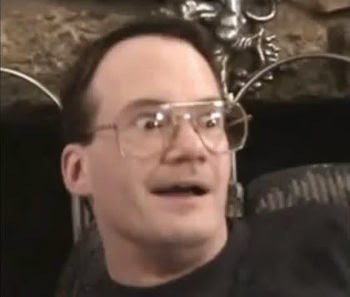 The end comes when Jake Booth applies an Australia Sleeper hold taught to him by Bill Dundee, because Bill Dundee is fucking broke, and Joe Briggs and Scott Sterling run in for the DQ.

There is absolutely no mention of Frank Parker, leading me to believe that he has jumped ship to the greener pastures of TNA.

Beau James and that badass Dakota Booth run off the bad guys with chairs.  Good for them.

Beau James and his septuple XL turquoise blue pancho are back to wrap up the show, talking about how Scott Sterling is so embarrassed at having been defeated in singles competition not once, not twice, but three times by Jake Booth.  Then why the hell would anyone want to see them fight again?  And that's gotta be a lie anyway, because any sane man would kill himself if he got the point in life where he had to lose to Jake Booth even twice.

Next week:  a closer look at the SIX MAN WAR!  Also, Equalizer Krunch in singles competition, as Chic White is apparently still in jail.

Oh, and Jesus Saves!  Everything but this horrible, horrible show.

I will be out for a few weeks on a well-deserved summer holiday.  Scott Keith will be filling in during my absence, assuming he's man enough to do so.