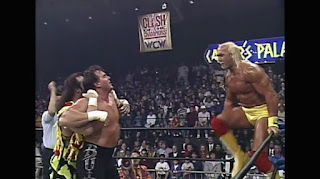 World television championship, Arn Anderson (c) vs. Johnny B. Badd- The fans voted for this match on the WCW hotline, somehow. #19009099900forever. Wonder what that number is now. Arn was a last-minute replacement for Honky Tonk Man at Starrcade, and won the title. Arn knees Badd, but gets kneelifted after a faked punch. Arn rakes the bootlaces on Badd's face, but gets dropkicked off the top to the floor. Badd then hits a plancha on Col. Parker and Arn. Axehandle from the top, and he locks on an armbar. Badd gets armdrags, then enziguris Arn while he's holding Badd's leg. Arn tried the same spot, but Badd ducked. Arn caught Badd on a rollup attempt and hot shot him on the top. Arn throws Badd out, and Parker kicks him. They slug it out, and Badd eats an elbow on a charge. Badd launches Arn into the turnbuckles, and gets a backdrop. Badd gets two clotheslines, and a headscissors. Badd punches him but Arn falls to the floor. Parker dumps a pitcher of water on Arn, and Meng rolls Arn back in. Badd chases Parker through the ring, but Arn DDTs him coming back in for the win. ** The TV title was practically the Arn Anderson Championship through WCW's history, anyway.

"Mean" Gene with the Faces of Fear. I'm not even sure Avalanche is still affiliated with these guys. Since Vader and Ric Flair are supposed to be ringside, Sullivan thinks the tide has swayed in their favor.

We see an Alex Wright music video set to his theme. Believe it or not, he actually mixed up his dance a little bit in it, instead of just doing the arms behind the head thing.

Bobby Eaton vs. Alex Wright- I liked that almost five years later, he hasn't changed his Midnight Express look at all. After a break Wright enters. I should note that Wright beat another up-and-comer named Jean-Paul Levesque at Starrcade '94. Yep. Eaton will actually soon sort-of take on Levesque's gimmick. Wright armdrags Eaton, and works the arm. Wright shoulders him down, then slams Eaton. Eaton punches him down, but Wright backflips out of the corner and then headscissors Eaton down. Wright throws European uppercuts, but misses a splash and hits the top rope. Eaton chokes him on the bottom rope, then locks on a reverse chinlock. Wright Wunderkinds Up, and gets a suplex. Baaaaaaack bodydrop, then a spinwheel kick. Wright goes up for a missile dropkick for 2.9. Eaton pokes his eye but Wright hits a twisting cross body. Eaton gets a swinging neckbreaker, and hits the Alabama Jam for a near fall. Wright gets another twisting cross bodyblock for the three. **1/5. This was a good showcase for Wright.

Okerlund tells us Hogan will face Vader at Superbrawl next month. He brings Vader out, with no Harley Race. He's been looking for Hogan, and will be sitting ringside tonight.

World tag team championship, Harlem Heat (c) vs. Stars N' Stripes-  After the Heat arrives, we hear Ric Flair's theme. The Nature Boy walks that aisle with two ladies, and they take seats in a different section than Vader. Heat won the belts from the challengers in I think a phantom change that was taped before the Heat faced the Nasties at Starrcade. Bagwell pounds on Booker to begin, but eats a knee in the corner. The Heat bail and Bagwell backdrops Booker back in. A double hiptoss gets two after Patriot tags. Patriot hits a flying forearm, and works Stevie's arm. Stevie catches Buff in a mid air, and slams him. Bagwell gets an armdrag, but Booker boots him coming in. Bagwell gets a sunset flip for two, and Patriot legdrops his arm. Patriot gets a belly-to-belly and Bagwell tags. Marcus unsuccessfully tries to monkey flip Booker, and then Stevie tags and the Heat double teams. Clothesline for two, and Booker hits a flying forearm/elbow for two. Bagwell and Booker both crossbody each other. Sherri distracts the ref so that Bagwell can't legally tag. Booker gets rammed into Sherri's shoe, but Stevie kicks Bagwell while he's covering Booker, and the Heat get the pin. **. At least it wasn't the Nasties.

We get comments from the Monster Maniacs. I believe eventually they were just the Mega Powers again. Hogan tells Jimmy Hart to be their lookout. That's reassuring.

We get a Superbrawl control center, where Gene rehashes what he told us earlier. Hogan and Vader are not to have any contact.

Avalanche vs. Sting- The Guardian Angel is the special guest referee, for some reason. Avy pounds on Sting in the corner, but misses a charge. Sting dropkicks Avy to the floor, but Bossman stops Sting before he can attack him on the floor. Flair has left his seat, by the way. Sting tries a slam but Avy falls on him for two. Avy drops a leg on Sting's chest, then butt splashes him in the corner. Double shoulderblock, and Sting gets to work in his passed out groin headbutt spot. Avalanche gets up in the corner, and Sting splashes him thrice. He hits a fourth, then slams Avy.  Scorpion Leglock, and Nick Patrick comes in and says Avy gave up. Angel throws Patrick down, then shoves Sting as they argue. Sting punches him in the side of the headlock, then gets clotheslined. The big men then doubleteam Sting, until Stars and Stripes and Wright make the save. *1/2

Gene talks to Angel, and calls him Big Bubba Rogers. He drops the classic "that referee wasn't even supposed to be in the riiiiing" line.

Butcher/Kevin Sullivan vs. Hulk Hogan/Randy Savage- This would be Savage's Clash debut, after debuting at Starrcade in a "whose side is he on?" angle. That angle would ironically get replayed with those two a couple of years later. This is an infamous match, but I'll get to that in a bit. Hogan starts with Butcher. He rams Bruti to the corner, where Beefcake helpfully rams his own head to the buckle. Butcher gets clotheslined in the corner, and Flair Flops. Macho in, and axehandles Butcher and rams Sullivan and Bruti's head together. Hogan axehandles Butcher as Macho holds him. Hogan hits a big boot but Butcher locks on the sleeper. Butcher lets go and he and Sullivan celebrate. Then Savage drops the elbow (his finisher) on Hogan, which wakes him right up. How does that even make sense? Hogan atomic drops Butcher and he flies outside. Hogan clotheslines Bruti and the Maniacs double big boot him. Sullivan in, and he whips Savage into a Butcher backdrop out of the ring. Butcher rams Savage to the rail and post. Sullivan does his little person offense to Savage, and they choke him on the top rope. Sullivan keeps beating up Savage on the apron and outside, despite not being the legal man. Back in, Bruti ties him in the Tree of Woe, and Sullivan tags and runs into him. What an in-ring debut for Savage this is. Bruti locks the sleeper on Savage, but he Stone Cold Stuns him to get free. Savage leaps and hot tags Hogan, who double noggin-knockers the heels. Hogan big-boots Butcher, and slams him. Savage then drops the big elbow, and Hogan legdrops Butcher for the win. Notice the elbow didn't revive Beefcake. *1/4. Vader then clotheslines Savage all the way out of the ring, and Hogan and Vader face off. And, oh yeah, it gets better- Vader powerbombs Hogan, and he pops right back up two seconds later. Hogan and Savage double axe bomber Vader, and suddenly have chairs to swing at him. The Faces of Fear hold Vader off, as their run as top heels official ends.

The first couple of matches were fine, but fuckin' Hogan, man. He killed the finishers of two of his biggest rivals in one night! I'd call it unbelievable, but unfortunately that's not true. And Sting was there and did stuff, too.